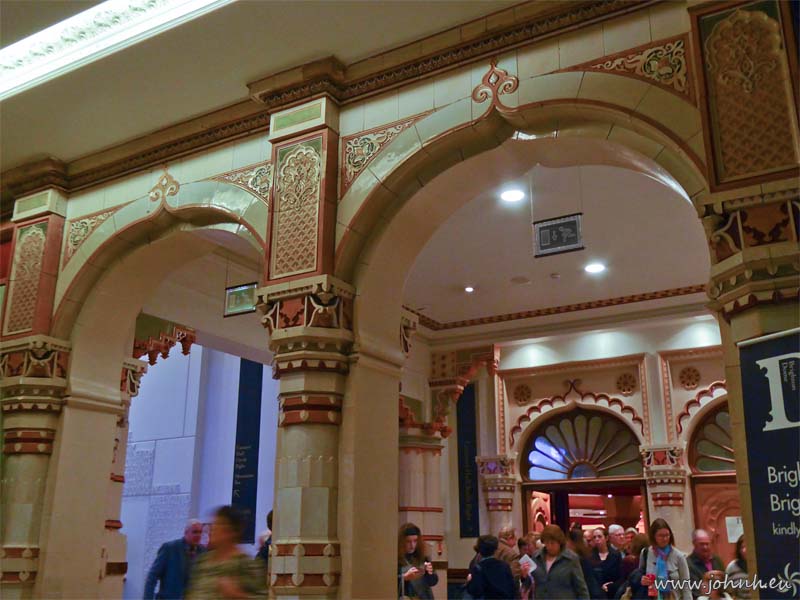 The Brighton Philharmonic gave us much sparkle and snap this New Years Eve afternoon in the Brighton Dome Concert Hall, a full house despite fog and train difficulties outside. The Brighton Dome predates the popularity of the Strauss dynasty in Vienna and most of the music in this programme, its Regency curves were converted to a fashionable concert hall which opened in 1866 and was refitted in Art Deco style in 1935 and refitted most recently in 1999-2002.

Stephen Bell’s acrobatic conducting style brought us a fizzing Entrance March from Johann Strauss’s operetta of 1885, The Gypsy Baron. Much precision and enthusiasm from the back row, the brass, percussion and tympani, which was matched from the front desk with fine string ensemble led by principal violinist and leader, John Bradbury.

The orchestra were joined by coloratura soprano Rebecca Bottone, wearing a black dress which contrasted elegantly with the orchestra’s white jackets. Whilst she sang elegantly, with fine tone and gusto as only a coloratura can bring to the show, I had the feeling that she wasn’t entirely comfortable with the Viennese repertoire, it could also have been that the accompaniment wasn’t entirely sympathetic. She seemed particularly poorly cast for the ironic pathos of “Poor Wand’ring One” from Gilbert and Sullivan’s The Pirates of Penzance.

This item was part of a section of British music, which the Brighton Philharmonic are concerned to keep before the public. The programme’s survey was finely balanced to make this journey. The comparison of the sumptuous tunes of Vienna, redolent with memories of Rococo and Hapsburg, with the suave or even bustling atmosphere of Eric Coates’ Mayfair Waltz and Robert Farnon’s Westminster Waltz was interesting to hear in performances with such insight as these players bring but I have the strong sense that they have this year gone a bit too far for the New Years Eve Gala audience, who are seeking entertainment rather than education.

The programme ended with a return to Viennese music of the Strauss family via a violin virtuoso piece by Fritz Kreisler, Stars in My Eyes, in which the leader John Bradbury enthralled the audience, notwithstanding the cries of an unsympathetic toddler.

The home run through the core Vienna New Year repertoire, which this orchestra do so well, was enthusiastically received by the audience, including as encores an Italian opera showpiece by soprano Rebecca Bottone which amply demonstrated her impressive talents on appropriate repertoire.

Finally - and after thankfully the last of conductor Stephen Bell’s jokes apparently gleaned from his Christmas crackers - the audience clapped along intelligently with the Radetsky March.

This old hall has seen all of this music and more, this programme reflecting the architectural and usage changes the building has undergone alongside with the changes in music style. Maybe it’s making too much of the parallels but one thinks of the concert hall opening at the time when the music of the Strauss family was already old hat, being replaced by the operettas of Lehar and also the dynamic music of Paris in the Belle Époque. And the refit of the Brighton Dome Concert Hall building to the relatively austere, new style of the Art Deco reflected in the home-grown British waltzes as we heard, just when the music of Austria was becoming politically unacceptable.

And the harp player was excellent too...