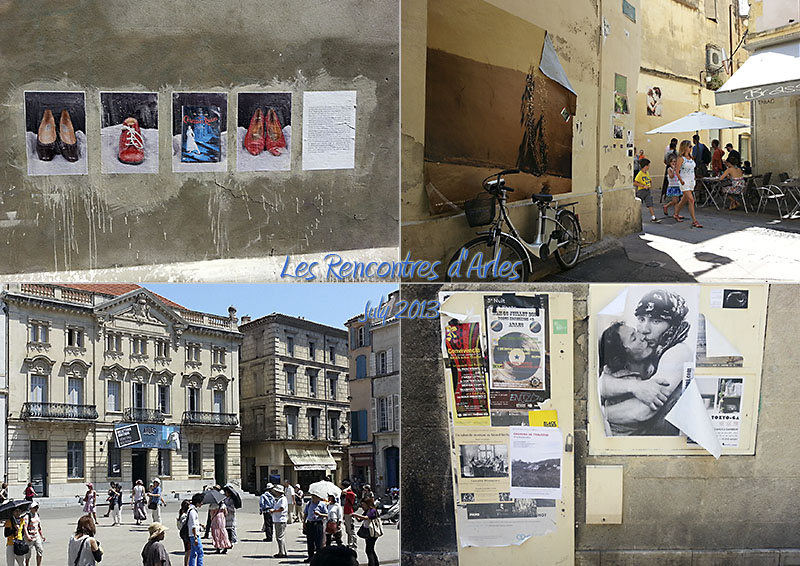 The twin surprise of the Rencontres d’Arles was both how much photography is on show and how each photographer strives for visibility but also how crowded the shop fronts and display spaces are with other events. Competing publicity ranged from bull fights to poetry festivals, and show fights in the town's Roman remains by re-enactment gladiators...

There are the expected formal displays of framed photographs in carefully curated gallery spaces, the visitors walking round respectfully. There’s a book or catalogue with nicely printed reproductions. And of course an app with taster photos from each exhibition but which - on my Android at least - failed to do the most useful thing of using the GPS and map to guide me from the app to the real gallery through the labyrinth of the delightful medieval street plan of the city of Arles.

But to my mind the real exhibition is out of the galleries. The photos that escape the galleries begin to have life beyond the frozen moment. Fly posted photography  competes on equal or even superior terms with graffiti and tags. Photography in shop windows, either sponsored (as in L’Occitane en Provence with Paulo Nozolino) ) or sympathetic local business (Maison Genin with Bertrand Golfier), has the critical advantage of superior visibility over photography in a gallery or photobook, maybe even over the web. It’s like my home quartier in Marseille, just outside the gates of the regional Conservatoire des Arts, where fly  posters and graffiti change weekly, sometimes nightly,

The “Free Art” movement goes further. There is the more or less expected “fringe” event, “Festival Voies Off”. But also a typically French concept of “free space” ( echoing the municipal “Space libre afficage”) with extensive ad hoc shows on otherwise blank walls. The transient nature, common to all fly posting, is an attraction and an invitation to look again. The adjacencies are party fortuitous and partly creative expression.

As far as an appreciation of the photographers whose presentations are seemingly the main event (Sugimoto, Larrain, Bourdin etc), it is to my mind sufficient that events like Rencontres d’Arles exist and flourish with a mix of new mainstream and experimental work along with retrospectives. The book is a more reasonable but much less dramatic way to appreciate the photography than attempting to visit fifty diverse spaces in a distractingly attractive medieval town in the full Provence heat of a July afternoon.

But the ancient Roman monuments and the medieval churches seemed to be getting at least as much attention as the photographic art...

And as a traveller, the non-TGV ride train ride from Marseille and descending from the train to the dusty and low platform in the midday heat at Arles reminded me strongly of my summer with an Inter-Rail ticket in the summer of 1982.