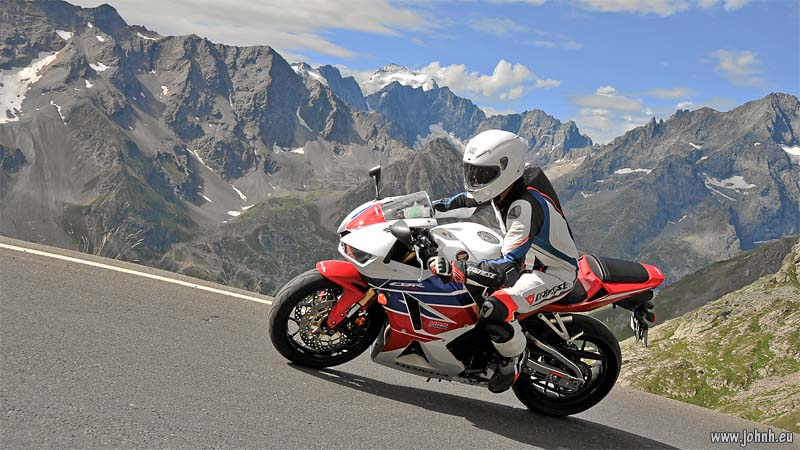 I saw the faraway white of Mt Blanc but in that weird sunlight you get just before a storm sets in. That was from the col du Galibier (2642 m.): all to the north looked dodgy weather, so rather than the big tour I had planned, I reran much of the col road a couple of times as practice of my riding style and technique. The north of the col works well for that and also the col du Lauteret (2058 m.): that’s a Route Nationale so the road is wider, the surface fairly reliable, but importantly curves are bigger, wider and longer, more sweeping in every respect so quite a different riding style again.

As usual, there were a number of photographers lurking professionally at the side of the road snapping everything passing on two wheels. I usually avoid them as their main clients are the numerous push-bikers but on this occasion, I stopped, offloaded my backpack and did a couple of runs past just for the camera. Compare the different photographic styles.
I stopped at Valloire for coffee and a succulent Tarte Myrtille at an artisan boulangerie. The rainfall radar confirmed what I had seen, so a bit more riding practice and then back to the hotel.
Knee sliders still intact and nowhere near scratching the elbow sliders but riding intensively like that is knackering for me as well as the tyres and the bike so no surprise that I’ve dozed through a small thunderstorm passing over the big mountain opposite!!!